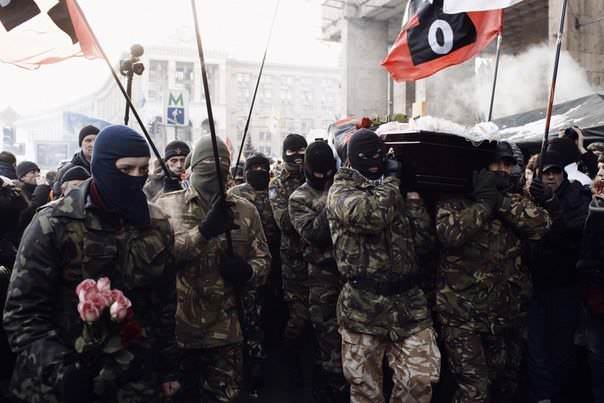 We here at The Great Revolutionary have kept a very close watch over the events surrounding the upheaval in the city of Kiev, the capital of Ukraine.  Over the past 3 months opposition leaders and protesters had taken to the central square in Kiev also known as the “Maidan” to organize anti-government rallies, and had in the process created what was called by many sources a “city within a city”.  This lead to bloodshed as government forces clashed with a militant style movement called the “Right Sector” which lead to about 100 deaths and over 500 injured with the eventual ousting of the democratically elected president of Ukraine Victor Yanakovich by force.  It is important to understand that the narrative about the sequence of events, who shot first, and who was justified in whatever actions they took is up to interpretation, as it is difficult at this time to really understand unfolding and past events.

Over the past few months I have had the privilege to speak with a resident of the Western part of Ukraine, a person who is politically affluent and introduced me to the ‘Right Sectors’ own online page on a Russian social website akin to facebook.  You can see the page itself here (may have been removed).  It is useful to understand that in some cases I am using the ‘Right Sectors’ own material to help paint the picture of the events in Ukraine as well as other first-person references/sources.

Dialogue In The Heat Of Battle

I’d like to write a little bit about my conversation with my contact in Western Ukraine, who happens to be a supporter of the ‘Right Sector’ as most Western Ukrainians are.  Below are a few snippets from our conversation translated from Russian into English.  For easier reading I will name my contact “Ivan”.

Ivan:  The phones are being listened on.  This is not a protest, this is a war.  It is scary what’s happening their, but also a lot of pride for my nation.

Me: This is in Kiev?

Me: Do you think war is unavoidable?

Ivan:  There is no way back.  If we stop at this point all of us will either be in jail or killed.

Me:  Is it impossible to negotiate and make a deal?

Ivan:  These are not people who you make deals with (talking about the government).

Me: Who’s in charge?  Klichko?

Ivan:  The people.  The opposition also cannot be trusted….Klichko does not control the opposition.  Simply put there are nationalists who have joined up with Right Sector in the ‘Maidan’ (central square in Kiev).  And they are not controlled by the opposition.  They act.  If it was not for them the protests would have been dismantled already and students with pensioners would have been simply beat up.  They have become a living shield and go on the attack.  The result – we have 20 thousand people in the barricades to whom the fate of the country is important.  People who are ready to give up their lives for a brighter future.

Me: These are some frightening events, seems like real unrest.

Ivan: It’s frightening to bury people.  But this unrest is better than the previous rest.

Me: What do you think?  Who is the East and South supporting?

Ivan: They normal people too.

Me:  I’m afraid the country can drift into civil war, what’s your take on this?

Ivan: There are zombinized people.  They are speaking about things which are getting pretty unsettling.  But I don’t think it will happen [civil war], however, anything is possible.

Me: I remember very peaceful and kind people during my time in your city.  Tell me, honestly, is there propaganda against Russians?

Ivan: No.  People are spreading rumors, but think who will benefit from it?

Me:  I think a group like ‘Right Sector’ would be against Russians.  Do you align yourself with Europe personally?

Ivan: Personally I am for Ukraine.  I don’t want the European Union or anywhere else.

Me: What about your city [Western Ukraine], is there peace now?

Me: Sounds pretty tense.  Who is carrying gun’s in the streets?  The police or just people?

Me: What about the police or local government authorities?

Ivan: They probably still have hang guns and what not.

Me:  I’m confused, why would people still walk the streets with guns like that then?

Japan in 2014 - Will This Be Japan's Year?Letters from Crimea: "There Is No More Trust Left"