Swiss Banks Lose Their Touch: Expose Accounts to the Fed’s 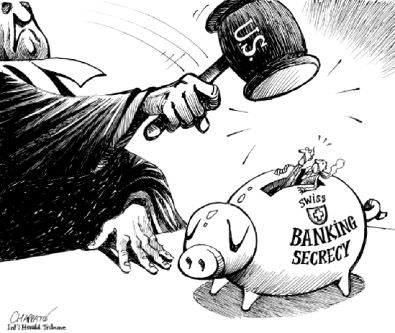 As reported by Russia Today (RT) and other news agencies, banks in Switzerland have come under heavy investigation for helping hide ‘black money’ for clients in order to avoid paying taxes.  It is now reported that Swiss banks are going to expose their clients names and wealth information as part of the “Multilateral Convention on Mutual Administrative Assistance on Tax Matters.”  They also report that 52,000 American clients are expected to be revealed with this new procedure.

According to RT, this new act enacted by Swiss politicians not only erodes the incredible credibility they have held in the banking world, but also will hurt their own economy,

The crackdown on the tight-lipped policy could cost the Swiss business, as the new policy may be a turn-off for foreign banks. At the beginning of 2012, 145 foreign banks had offices in Switzerland, and as of May 2013, 16 had left, according to data from the Association of Foreign Banks in Switzerland.

Between 2008 and 2012, foreign bank assets decreased by $921 billion, as tax evasion eroded and clients withdrew money.

The trend however it seems these days is the eventual consolidation of power in central governments quest to reign over their constituents.  The measures enacted will give government more power over individuals and in return stifle innovation and self-initiative with those capable of creating wealth and expanding businesses.  Not only this, but this is eroding the fine line between state sovereignty and what we would call an ever more approaching world wide government.  The introduction of international laws, expanding jurisdiction of the United Nations and overwhelming political pressure from Western governments which forces smaller less powerful governments to ‘comply’ with their agenda all serves the purpose of consolidating power in the hands of a few men.

I mean, who would have ever thought that a foreign country would comply with a far away governments requests at a loss unto itself?  Are the peoples interests at hand here?

With all this being said, I haven’t even touched on the topic of taxes themselves and their general legitimacy.  And the background story to Swiss banks, according to complaints from foreign governments, is in fact taxes.  A phrase often taught in elementary school here in the US from the revolutionary days by great patriots of their time, “no taxation without representation.”  Perhaps the problem is not in people evading taxes at all.  Maybe the problem is in governments mishandling of taxes, corruption, and power-hungry politicians who are ready to take anything they can pull out from the people and their hard work in order to keep the bureaucracy running. 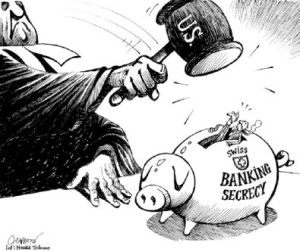