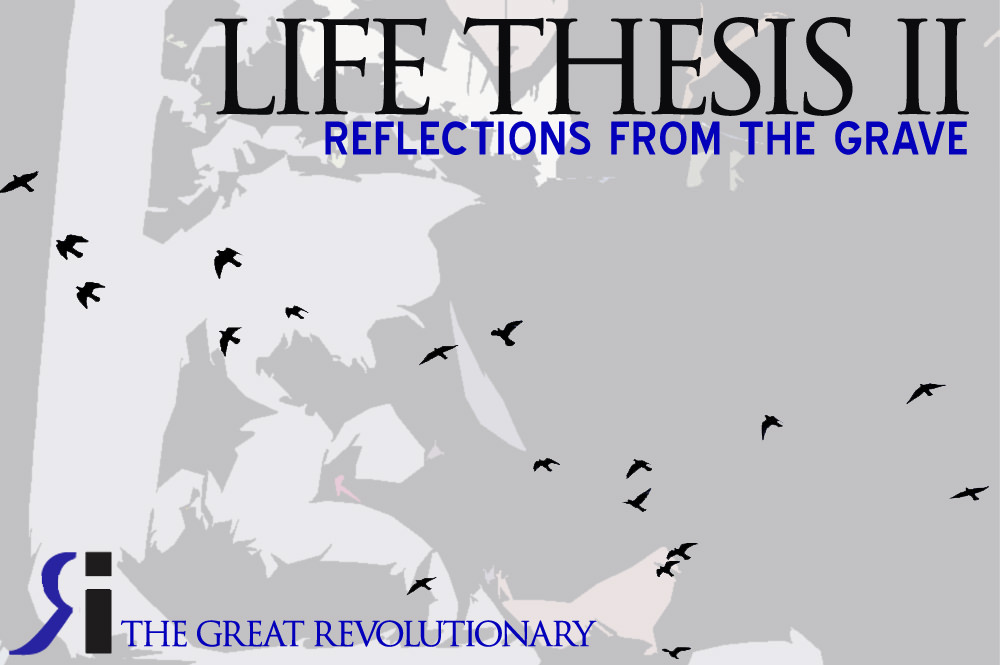 A few moments ago, my entire self composed of the soul spirit and body eased its way into complete oblivion and as physically I ripped away from the ground and my plane gained altitude I had no remorse over any possible outcome, even one of accidental catastrophe. There exists an element known to mankind and to which he owes all his fears and worries and even greatest feats – The Desire to Live. The desire to live is the psych, it is the seat belt, and perhaps it is the engine all in one. Without this element a man can expect to do anything, be anywhere and seek anything at no cost spiritually emotionally or mentally. Perhaps such a man has reached a threshold also called – The Desire to Die or more genuinely put, to pass away. Now that is a dangerous position. And for the record, my oblivion to the desire to live in no way made in me a desire to pass away. Let that be the last frontier when men seek death (and perhaps not even find it?)  No, I simply escaped everything I was.

I haven’t felt emotions for a month already. I’ve seen so many wonders, and miracles and simple feats of God and yet it is as if my soul is sleeping. And then it becomes easy to experience death without actually dieing. A few times in my life I had felt these moments. Helplessness to the point that within the deep convictions of your heart and all the logical calculations of the mind you had come to a conclusion that you will die. And at that moment before you do meet your certain demise you first die within, preparing yourself for it and fighting to eliminate any feelings which would make the progression more difficult. And although you had come to the fact of dieing you never cease to hope. Never does hope leave a man, not even perhaps when he is in front of a firing squad and the general pronounces the countdown, and even when you hear the sound and feel for perhaps the few seconds your punishment even then perhaps you always hope until hope no longer becomes a process of the mind. And when you die without dieing you hollow out yourself, empty out your emotions and thoughts to the point when you become zero, when you become the same as when you were born. And yet I’m still alive, and therefore that hollow had breathed in the wondrous experience of life anew.

Yet moments occur which scar your soul perhaps forever. Moments which take their toll. And you realize that you will have to carry the burden of those scars with you always, since it becomes your responsibility and meaning. The apostles carried their cross and not only perhaps because Jesus became to them their salvation, but because he was their closest friend and a man who instilled the most into their minds and hearts. The disciples had to part away with a teacher of life, and a person who they knew loved them. And it was that burden which they carried that allowed them to change the world.

And there are two things then, that the biggest effect probably that man can know in this world is that someone loves them. It can be perhaps the single most powerful force. Its root can spring from anywhere and its reaches past the grave. When man knows he is loved, he will always know he has a chance to start over, to re-make and to advance through life’s deepest and troubling moments. The second is that the burden of having to part with that which loved you becomes your most cherished memory and if taken correctly your most head-strong motivation to surpass all expectations once planted by that person. And then we learn the oldest natural principle of survival – lest a seed not die it will bring forth no fruit. And it is primarily in the fruit which we edify ourselves and also produce in this world which will reveal to us the most meaning and purpose. Therefore it seems to part with the most beloved is to also gain the most essential – but only if one has a strong and true character, to open their eyes with each day.

And it is exactly here, at these crossroads which I find myself. I had parted with what I called my most closest person. A person who I knew always loved me and even when I knew I was doing wrong that person would over-look my weakness and come to me with open arms. There was no limit to the grace to which I nourished myself at this persons gates. And when it came time to bury that person, I had felt the biggest gap in my soul, for I was burying a part of myself, my most invested and rich part. It was the part to which I owed my successes and triumph’s and it was the part that I achieved my best for, the part which belonged to my grandmother. At that place and time, under the gray clouds which were gathering to shower the living with cold rain I realized that a chapter – a blessed and rich chapter of my life had dwindled away and I was left standing in the mild wind watching as my biggest anchor vanished. The seed was planted. And when I had to retire from the sacred ground and escape into deep reflection I saw that above all she saw in me what I myself did not see. The strength and wisdom to overcome. To simply continue to live as though I am also dead would mean to squander every single moment that person gave me to raise me up. Instead, it comes as a true conviction that it has come time, the proper and true time to rise above and become everything which I had not yet become, and to use that seed to plant another seed for the future.

In Memoriam Of A FriendPublic Transportation: Japan or "The Land of the Rising Sun" and its Railways