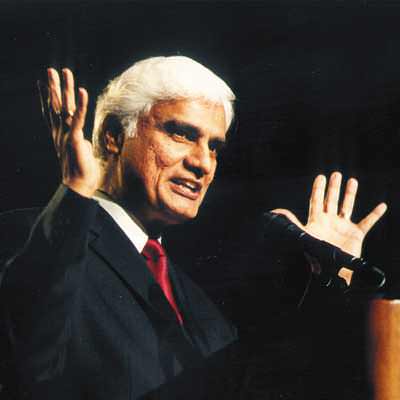 “For forty years Ravi Zacharias has spoken all over the world and in numerous universities, notably Harvard, Princeton, and Oxford University.  He has addressed writers of the peace accord in South Africa, the president’s cabinet and parliament in Peru, and military officers at the Lenin Military Academy and the Center for Geopolitical Strategy in Moscow.  At the invitation of the President of Nigeria, he addressed delegates at the First Annual Prayer Breakfast for African Leaders held in Mozambique.

Dr. Zacharias has direct contact with key leaders, senators, congressmen, and governors who consult him on an ongoing basis.  He has addressed the Florida Legislature and the Governor’s Prayer Breakfast in Texas, and has twice spoken at the Annual Prayer Breakfast at the United Nations in New York, which marks the beginning of the UN General Assembly each year.  As the 2008 Honorary Chairman of the National Day of Prayer, he gave addresses at the White House, the Pentagon, and The Cannon House. He has had the privilege of addressing the National Prayer Breakfasts in the seats of government in Ottawa, Canada, and London, England, and speaking at the CIA in Washington, DC.”

To read more about Ravi and his work please visit http://www.rzim.org/about/team/profile/?region=USA&key=0&id=8, and learn more about his ministry, RZIM, which is providing answers to people throughout the entire world.